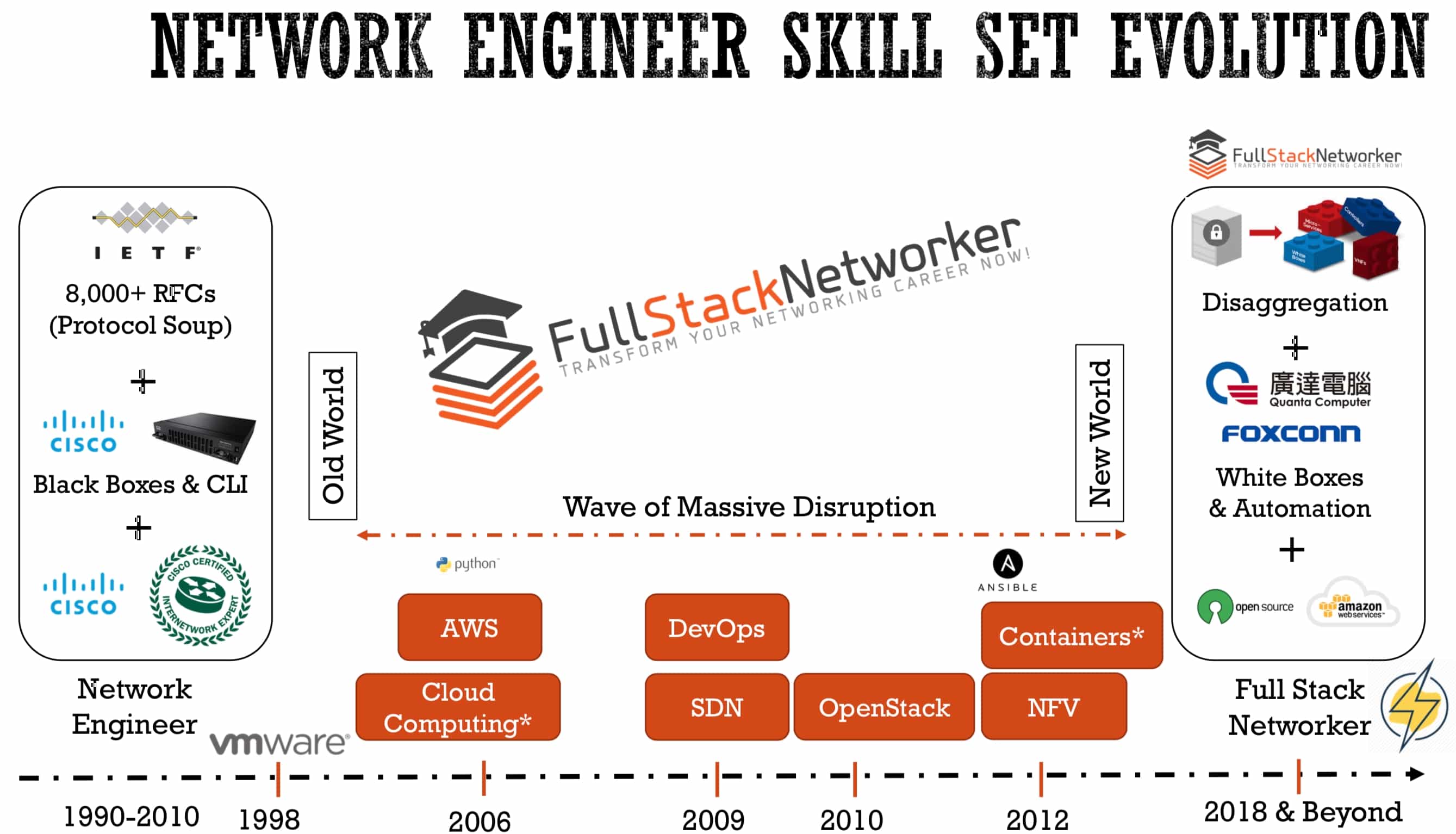 Before, we get into why, what and how FullStack networker, let me a do a quick introduction as to who we are and what we stand for.

We’re a bunch of industry veterans out of silicon valley (California) with corporate backgrounds from Cisco, Huawei, Apple (and a few more). Most of us started our career when networking was about knowing Cisco IOS CLI and protocol soup from IETF (ever heard about them?). Now, since we are an ambitious bunch, we all did our CCIEs and wrote for Cisco Press too! This was a lot of fun, until it wasn’t, and that brings me to why we created Full Stack Networker. Disruptive technologies such as virtualization, cloud computing (or AWS!), SDN, OpenStack, NFV, white boxes (from ODMs or OEMs), and DevOps tooling ecosystem over the past seven years or so, have really transformed what it takes to be a Network Engineer (don’t believe me? check out google careers here). We started Full Stack Networker to help out our fellow citizens by bringing them all they need to know and learn to transform their careers and avoid facing skill set irrelevance. “Full Stack” refers to knowing everything it takes to stay relevant and thrive in the new era as a network engineer.

Now, I have already mentioned the key technologies that are disrupting networking, so let’s get into how we can get this re-skilling effort started. If you look at the disruption stack, you can easily identify that, the very foundation of everything is open source software ecosystem and LINUX. Linux is the perfect place to get stared, if you don’t know enough of it already.

Here are my four reasons, why Network Engineers need to learn Linux on their path to becoming Full Stack Network Engineer. Keeping this in mind, we’ve made our Linux Fundamentals and Shell Scripting course available.

Once you believe you got Linux down, your next stop is network automation. Without a doubt, I can tell you that network automation is the lowest hanging fruit so to speak, is here to stay and you need to be part of this transition. Fusion of network and server tooling ecosystem is the inevitable that awaits us. This would require us to deeply understand Python and Ansible programming fundamentals and corresponding libraries from both vendors such as Cisco, Juniper, Arista as well as multi-vendor libraries such as netmiko and napalm etc.

0 (0) Network automation is the biggest trend in networking today and picking up even more steam as networking infrastructure becomes virtualized, software-defined, and cloud-based. If there was ever another driver needed for network automation to kick in high gear, employees working remotely due to coronavirus is it. As per Gartner, by 2023, 60% of […]

5 (1) In the last several articles, I made a case that as a network engineer, when you look back at 2020 say in three years, you will realize that it was the year that kicked the network automation into high gear. It is super critical to note that network automation isn’t about using network […]